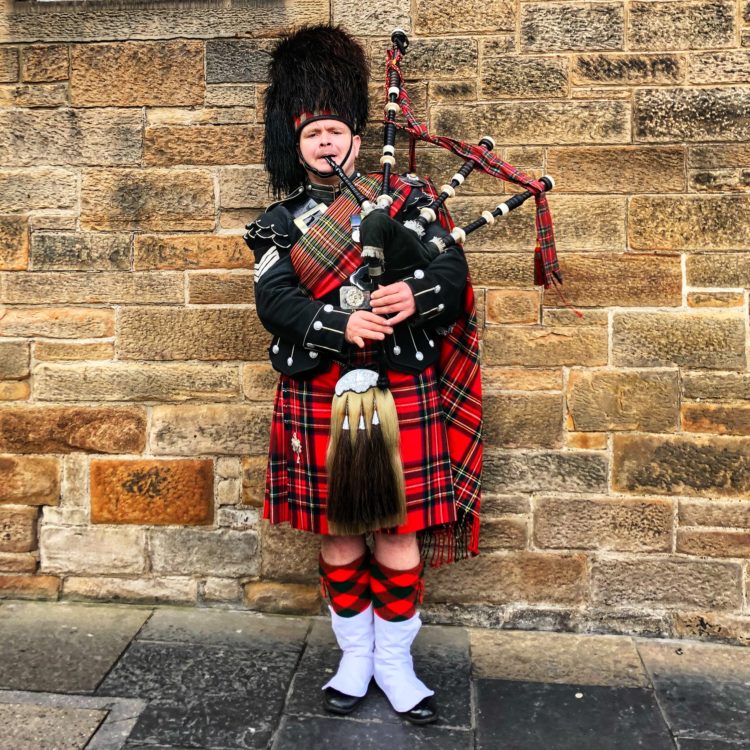 As bagpipe music pierced the air and young Scottish lasses swirled on stage, I was distracted by a somewhat more annoying, persistent sound.

Vanessa: What’s that on my plate?

Terri: Some sort of Scottish food. Taste it.

Vanessa: I don’t know what it is.

Vanessa: Give me one good reason.

Terri: Because we’re on a Taste of Scotland tour, so you should taste things. Now please just put it in your mouth so I can hear the music.

Vanessa: Not until you identify it.

Vanessa: There’s a real future for you in menu writing.

While perhaps not the most appetizing food, haggis has a big role in Scottish traditions. In fact, it sometimes even gets its own ceremony, as we learned at a true Scottish dinner, where this “delicacy” was escorted by a bagpiper in full regalia, accompanied by a kilted man with a thick accent who sang the praises of haggis in a very moving tribute that we completely couldn’t understand. But while tasting haggis is certainly an option on a CIE International Taste of Scotland Tour, it’s not a requirement. In fact, the only thing required of you on this type of tour is that you show up…and relax.

Let someone else do the work

Vanessa and I tend to be independent travelers. We’ve set out on our own in countries like Belize—where renting a car from a local in less than stellar condition (the car AND the local) landed us in the middle of a herd of goats. Tackling Germany with its mind-boggling road signs also comes to mind as one of our less than thought-out decisions. And, we’ve been known to book lodging in locales with frightening amenities…or lack thereof. But this time, we let someone else do the planning—and the driving—as part of the Taste of Scotland motorcoach tour with CIE International.

Although this is not our typical style of travel, choosing this trip turned out to be the best possible experience for our first foray into Scotland for many reasons. Not only did we get to experience the highlights of Scotland including Glasgow, the Scottish Highlands, St. Andrews, Loch Ness, Edinburgh and points in-between—but we got to do it while drinking whisky. And seeing really large, hairy cows.

No One has to Drive (or Die)

One of the best parts of touring on a motorcoach is that you don’t have to figure out how to drive in a foreign country. On the other side of the road. Or with someone who, according to Vanessa, might be easily distracted.

Terri: I can totally drive on the opposite side of the road. I did it in Ireland once…for about 15 minutes. And then there were sheep.

Vanessa: And I’m sure there are now less sheep in the world. You’re not driving. And since I’ll be sampling whisky, I’m not driving either.

Terri: And the sheep rejoice!

My husband, Greg, joined us for this adventure and has opposite-side-of-the-road driving experience…sort of. But that would mean I would be constantly navigating, and Vanessa would be clenching her teeth and holding on for dear life in the back seat.

Not to mention, we had whisky to drink.

It Turns out we Actually Like Other People (Sometimes)

One of the highlights of a group tour is often the group itself. On board the motorcoach we were entertained by our lovely guide who shared not just the history of the places we visited, but also plenty of folklore—all with a delightful Scottish brogue. And there was music…melancholy songs about the ‘bonnie bonnie banks of Loch Lomond’ along with peppier bagpipe tunes.

One thing that impressed me was the age range of all of the people traveling with us. For some reason I expected to be surrounded by lots of retired couples in their 70s and 80s. I would have been fine with that, but it was cool to see a young lady in her 20s sharing the experience with her grandmother. We also hung out in the hotel bar one night (OK, every night) with a couple celebrating a 40th birthday. When I asked what made them choose this mode of travel, convenience was certainly part of it. But it was more than that. They said that they didn’t like to research a destination. They preferred to show up with in-depth experiences laid out before them. Now I totally get that.

Spending time in the company of such a diverse group of travelers really enhanced the experience for us. I’m sure they felt the same way about traveling with us…maybe.

A ‘Taste of’ Just Whets the Appetite

Vanessa and I are both of Scottish descent, so visiting our ancestral country was a dream come true. In fact, we were so overwhelmed with all the places to explore that we couldn’t decide what to do when. We wanted to see it all!

Typically, I would figure out a way to cram 4,572 experiences into a 5-day trip, which would give Vanessa a headache, and me the feeling that there was still something else I missed! Thankfully, the itinerary for the Taste of Scotland tour offered an excellent overview—and just made us hungrier to plan future visits to our homeland.

We began our tour in Glasgow, a city with a unique blend of old and new architecture and fabulous murals. It was a wee bit soggy for our drive alongside Loch Lomond, but it was beautiful even in the rain—and the weather actually worked quite well with the melancholy lyrics being piped through the motorcoach’s sound system. The rain subsided enough in the Scottish Highlands for us to get a few photos of the stunning landscape, and during the ride we continued to enjoy viewing the awe-inspiring vistas and tumbling waterfalls–while staying completely dry.

Later we boarded a boat and cruised Loch Ness, searching for everyone’s favorite sea serpent, Nessie. She, unfortunately, failed to make an appearance, but I’m quite certain she was lurking somewhere deep in the cold waters—probably just waiting for the loud, laughing tourists to go away.

Did I mention whisky?

We stopped at Blair Athol Distillery in Pitlochry, where we toured the facility while breathing in as much of the whisky-laced air as possible. And we tasted their delicious 12-year-old single-malt whisky—one of the best things to come out of Scotland (besides us, of course.) You have to love a place where you not only get to enjoy a fine product but also get to spend an hour in such a bucolic, serene setting—there’s something absolutely charming about a distillery where instead of modern machinery, there are signs to remind you that the malt whisky lies sleeping while Mother Nature and Father Time do their work.

Let there be sun

On our sunniest day, we explored the golf mecca of St. Andrews, Scotland. It was better for everyone if we didn’t attempt to play (the one and only time we tried to learn, the golf instructor actually threatened to quit, but that’s another story). Instead, we wandered the cobbled streets of the town, past shops selling custom-made kilts and, of course, whisky. The ruins of St. Andrews Cathedral beckoned us to the top of the hill, where we wandered through a medieval cemetery to see breathtaking views of the North Sea; we followed the road back down toward the beach, walking along the edge of the sea past what was once St. Andrews castle.

Our final destination was the historic city of Edinburgh, where we toured the stately castle towering above the city center. The afternoon included wandering the Royal Mile, where medieval houses still stand and roaming the ancient cemetery of the Parish of Saint Cuthbert where a watchtower was built to keep a lookout for grave robbers—an occupation I’ve never quite understood. It’s just so….gross.

Which brings us back to haggis. While in Edinburgh, we greatly enjoyed the Spirit of Scotland dinner, where despite that offering (no one lining up for seconds?) there were actually many other edible options, all served with a wonderful side of Scottish dancing and storytelling.

So yes, we’ve tasted Scotland and we’ll be back for more. Probably not more haggis, but definitely more Scotland.

CIE International offers tours in several destinations including Scotland, Ireland, Italy, Eastern Europe and Iceland. There are several themes too—from family tours to castles to whisky tasting. There are also self-drive options for those who are competent. Check out all the options at www.cietours.com.

Disclosure: We were the guests of CIE International for our tour but all opinions, shenanigans and whisky consumption are our own–we claim it all.