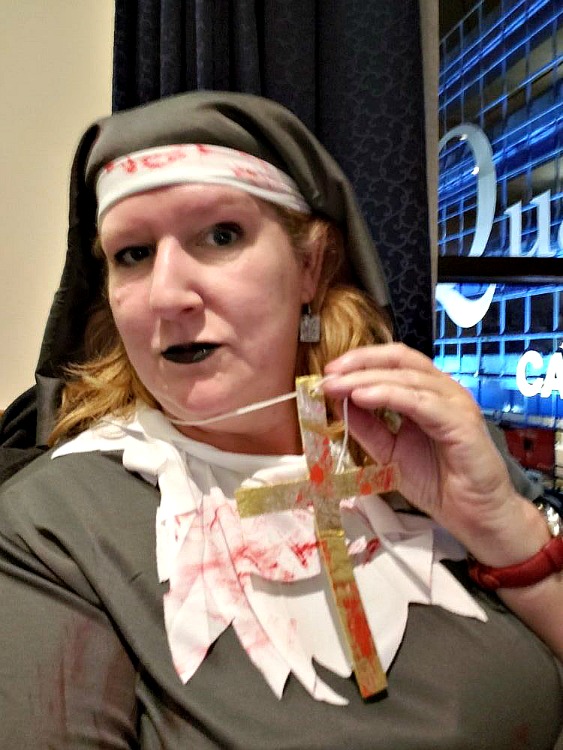 They made me a nun.

And not just any nun, but one wearing the full-length habit, with headpiece, including wimple and veil, and a big gold cross hanging around my neck.

And did I mention that my outfit was covered in blood?

As you might have guessed by now, this was my costume for Halloween, which Terri and I celebrated last year in Derry, Ireland—the city where the holiday originally got its start. And while I hated to question the decision-making of our hosts, who put us in “fancy dress” as it is called overseas, I had to wonder what they were thinking when they handed a card-carrying atheist this costume in a country that has already had some issues with religion.

Is she a good witch…or a bad witch?

Terri, however, had her own set of problems.

Terri:  I can’t wear this costume out.

Vanessa:  Why? You’re not going to get stoned by the masses for blasphemy like I am. You’re a witch. Which is certainly closer to true life than me being a nun.

Terri:  Ha Ha. I can’t wear this out because it’s too tight. I’m like a sausage in this dress.

Vanessa (snorting a laugh when she sees the full effect):  It is a little snug. Just don’t sit down. Or breathe. And for goodness’ sakes, don’t eat any candy.

Terri:  You’re not taking me seriously! I’m in pain!

Vanessa:  Wait until I slap your knuckles with a ruler.

Celebrating with a different kind of spirit

Now the good news, other than the fact that Terri did not die of suffocation that night, is that there is so much going on in Derry during this festival that no one notices what you’re wearing. As Ireland’s largest Halloween carnival, Awakening the Walls attracts thousands of people from across the globe to take part in the three-day celebration that traces its roots back to the pre-Christian fire festival of Samhain.

No matter where you look, there is something magical to see. From fairies to fire spinners, to giants and flying, glowing birds that dipped and swirled above the crowd, the festival truly lived up to the ancient traditions of Samhain, which is considered the time of the year when the veil between our world and the spirit world is at its thinnest. Walking among the fairytale birds and beasts, and characters that almost defied the imagination, it wasn’t a big leap to feel that some of those walking among us weren’t wearing costumes at all.

One of the most unique aspects of the festival is that it’s held within the walled city of Derry, which is in itself an almost mythical destination. Wandering along the 1.5-kilometer stone walkways above the city, which were first built in the 17th century as a way to protect English and Scottish Protestant settlers from Irish rebels, it was as easy to step back in time as it was to step into the spirit realm. As the only remaining completely walled city in Ireland, Derry has an enchanting charm of its own, no matter what time of year.

Luckily for us, we blended right in with the crowd, which I realized while being served a cocktail by a waiter with an ax hanging out of his head. While I did have a few tense moments—I wasn’t sure if the explosions I saw were the fireworks over the River Foyle or a few lightning bolts being hurled my sacrilegious way—it’s impossible to not get swept up into the spectacle that is a Derry Halloween.

The festival is held every year, though there are different themes, so visit www.DerryHalloween.com to stay up on the latest news.

To learn more about year-round reasons to visit the Walled City, visit www.DiscoverNorthernIreland.com or www.VisitDerry.com. Despite my recent desecration, the walls are still standing.